Fifteen minutes before we were scheduled to leave, the hotel gave us our wake up call. We climbed into our clothes and stumbled out into the lobby where we joined a handful of equally bleary-eyed guests. We were given a boxed lunch before being led to a spacious minibus. Given the length of the ride, I was pleased to only be sharing the bus with a few other people. Besides our small group, it seemed that the only others making the trip were four Korean tourists who, coincidentally, we had actually already met around a campfire in the White Desert the week before. 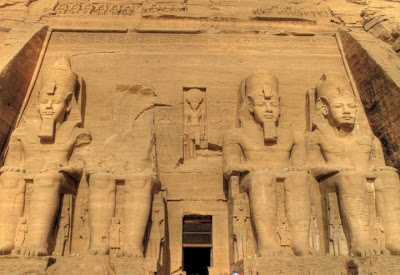 Unfortunately, this was only the second of a long series of stops. The empty seats quickly disappeared as we pulled into random alleyways and sidestreets, gathering one or two more tourists each stop. Soon, every seat was filled, but that didn’t stop our imaginative driver from creating more. Our bus had foldaway seats hidden everywhere – under other seats; on the floor; behind ingeniously disguised panels in the bus' walls. If the vehicle hadn’t already been horribly crowded, it might have actually been fun to guess from where the next seat was miraculously going to appear. In the circumstances, however, what had looked like a bargain when we booked was beginning to look even more like a steal, only we had become the victims.

"Well, at LE70 each, that's only about $5.00 each, not too bad for seven hours of transport," I said optimistically.

"It's more like £10.00 sterling, which is what you'd pay for a full-size seat on a National Express bus in England," replied Ms. Chadha with better math and brutal realism.

Awkwardly folded into a seat further down my row was an enormously tall German (he was 7'2", which according to Ms. C. would have made him the tallest man in New Zealand). At the first stop, he asked the only slightly less enormous Korean passenger who sat in relative comfort by the door if he wouldn't mind trading places. Unsurprisingly, the Korean passenger wasn't interested. “But my legs are very long, it would be more comfortable," pleaded the German. The Korean guy thought for a second before defensively replying "I will stay because otherwise I have the same problem." I prepared to watch what would certainly be the tallest smackdown I had ever seen, maybe the tallest ever! I confess to being a little disappointed that nothing came of it. 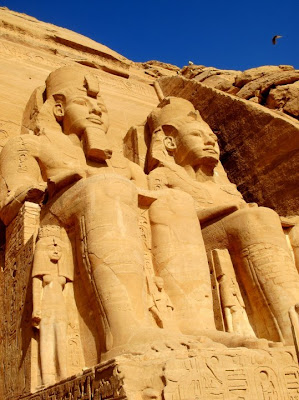 We settled into our seats, some more happily than others, and waited for the rest of the convoy to gather. Fifty minutes later, it had, and one by one we pulled onto the road to Abu Simbel. I don’t often imagine convoys, but when I do, I imagine something impressive - the word evokes military supply lines, long-haul truckers, ships dodging submarines in the Atlantic. Minibus convoys, on the other hand, are absurd. A lone minibus look vaguely ridiculous, five dozen of them in a row look supremely so. The safety advantages weren’t clear either: attacking a lone bus requires a certain amount of timing and precision. Hitting a chain of buses that is scheduled to pass at a certain time, on the other hand, must be an attractive target for even the laziest, most clumsy terrorist. In any event, the convoy had broken apart within the first twenty kilometres. The only effect the convoy seemed to have was to bring down property values in the neighbourhood where it gathered. What a nasty surprise it must have been for the locals. Imagine: your first night in your new home and you’re woken up by the sounds of forty or fifty minibuses idling outside your window. What would you do when you realized that this was going to happen to you every night for the rest of your life?

Abu Simbel itself is an extraordinary site well worth the three hour drive (especially if you do it in an adult-size bus). The four collosi of Ramses II outside the temple are familiar enough – as a child one of my favorite issues of National Geographic was an article on the relocation of the monument to higher ground as the rising water behind the Aswan dam threatened to innundate it. What I hadn’t known was that the interior of the temple was so extensive. It’s incredible both for the quality of the original work and for its level of preservation. I’d recommend heading straight for the temple interior when you arrive. Most tourists will be stuck listening to their guides’ background lectures just in front of the temple, so even in the middle of such a large crowd, you can steal fifteen minutes of peace inside the temple if you hurry.

There’s plenty of time later to enjoy the exterior views of the temple, where the crowd milling around below only accentuates the size of the monument. The colossal quartet of Ramses II were built to scowl at travellers from the Nubian kingdoms to the south, impressing upon them the power and terror of Pharaonic Egypt. It’s still effective today, though now the monument is set in an artificial mountain overlooking an artificial lake, and the modern oppressors of the Nubians have reverted to more barbaric ways of demonstrating their power.

The hour-and-a-half given to see the site seems like more than enough time, but before long the roar of a thousand minibuses told us that the convoy was reforming. We settled back into our seats and tried to get comfortable as the convoy, united for now, began the long trip back to Aswan.
Posted by I Am Chadha at 11:19 PM
Labels: Abu Simbel, Africa, Aswan, blogsherpa, Egypt
1 comment:

Down in Upper Egypt

EgyptAir offered us a choice of three afternoon flights, all of which were scheduled to leave within ten minutes of each other. For several hours on either side of this small handful of departures, nothing left at all. Flying planes in a convoy might have seemed strange to me once. Fortunately, I've stopped trying to understand these things and, instead of puzzling over the logic and worrying about the waste, I now just sip my mini can of Pepsi* and enjoy the extra space in my choice of one of three available planes, none of which was even one-third full.

The only disadvantage of a near-empty plane is that it suffers more from the effects of the hoht afternoon air rising off the baking desert beneath us. The same rules of atmospheric thermodynamics that allows birds to gracefully wheel in ever-higher arcs over the desert floor also apply to 747s, but there isn't anything graceful about our flight, which lurches clumsily through the air. I would never have described myself as someone who’s afraid of flying, but I’m going to start avoiding these Saharan flights. They’re nasty. 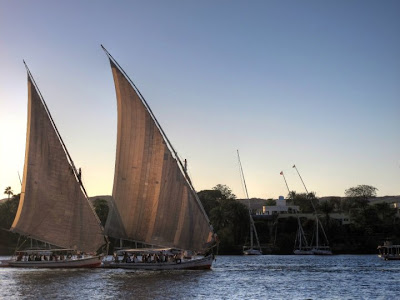 The Aswan airport is tiny and, on a Sunday, was completely empty. This didn’t mean that I could make it to the bathroom unobserved by the staff, however. As soon as I left the stall, a newly-arrived attendant handed me a paper towel and I handed him back a one-pound note. I could see right away from the polite-but-disgusted look on his face that I had made a mistake. I realized that I’d used my left hand to pass him his baksheesh. This must have been particularly revolting given where I’d just been. I do really try to not make these mistakes, but I’ve found that there’s a difference between knowing the proper etiquette and having the presence of mind to always observe it. This is why whenever I’ve had the opportunity to eat with anyone local, I literally sit on my left hand.

The taxi cartel at Aswan International is unusually disciplined, and my price negotiations weren't impressing anyone, including Ms. Chadha. When my generous counter-offer of LE50 was refused en-masse by the rank of drivers, I was left without any other plan except to sit there until someone crumbled. Someone did, but it was no surprise when that someone was me. Unless you’re a masochist or on a very tight budget, book a hotel transfer.

I’d read that Aswan’s souq was the best outside of Cairo, and since I was still in the market for a backgammon board, we decided to give shopping a try before anything else. Aswan’s municipal government had completely refurbished the market several years ago. Gone are the narrow, twisting streets with shops and vendors of every sort all haphazardly heaped together. Now the uniformly sized shops sit in neat rows on newly paved streets. It feels like you’re in an exotic version of a suburban shopping mall, though admittedly one with a more interesting food court. The main disadvantage is that in these “improved” open streets, the shopkeepers can see you from thirty meters away, and so have time to position themselves as inconveniently as possible – usually with the aim of separating you from whomever you’re walking with. The shopkeepers recognize that it's easier for a group of people to ignore them and have adjusted their strategy accordingly. In Aswan, you have to fight to stay together. 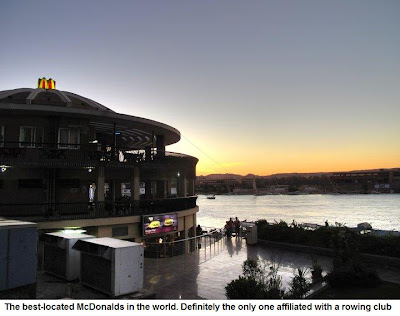 Overall, shopping in any souq is definitely a more pleasant experience when there's actually something you want to buy. However, after seeing thirty versions of the same backgammon board, we gave up and went back to the hotel. I still have hope that I’ll find what I’m looking when we’re back in Cairo. If anyone has any suggestions, please send them my way. I'm probably going to end up getting one on eBay, which would be pretty lame after having lived all of this time in North Africa.

We stayed at the Keylany Hotel, which is a few streets off the Corniche. This means that you lose the river view, but it’s quieter, cleaner, and I’m not sure that the price can be beat. It is a shame about the view, though. When I’d thought about the Nile, the scene from the Corniche is what I’d imagined: a ribbon of blue between dun colored cliffs and mountains of sand, thick stands of palms gathered on either side. It was beautiful and the rooftop of the Keylany would have been the perfect place to take it in – it’s been tastefully decorated with wicker and hundreds of fairy lights** (which looked better than I make it sound).

We decided to have a quick drink before calling it an early night (we had a 2:50 A.M. wake-up call to look forward to), but instead managed to get caught in a conversation with a roof full of backpackers. Trying to extricate yourself from a tipsy pair of chatty South Africans isn't easy, but I felt like I was up to it after an afternoon of practice in Aswan’s markets. Instead of letting myself be suckered into listening to an evening of stories even more exaggerated than mine, I followed my fail-safe souq escape tactics: I smiled, didn’t let them get between Ms. Chadha and me, went for a quick exit while ignoring the usual mix of pleas and insults, and hoped we got away without offending anyone too much. I think I’m getting good at this.

*Pepsi is killing Coke in the Egyptian cola wars. I have no idea why. It's very disheartning.
** I've always just called them "Christmas lights", but that doesn't seem to fit here. I've adopted Ms. C's terminology.

Posted by I Am Chadha at 12:57 AM
Labels: Africa, Aswan, blogsherpa, Egypt
1 comment: